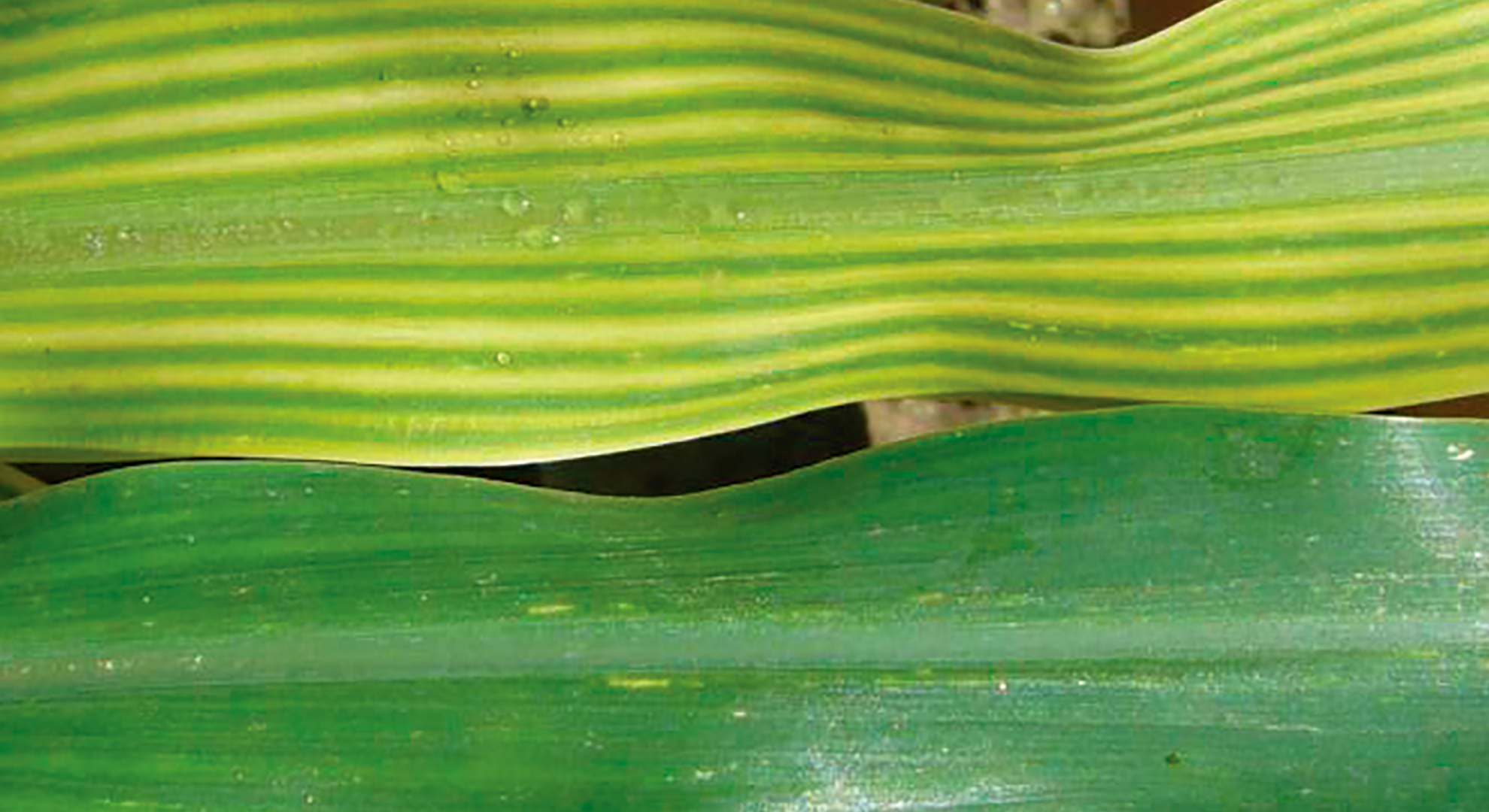 With genetic tweaks, researchers can coax corn and other cereals to take in more iron, but sometimes the plants rebel.

The corn Elsbeth Walker grows looks a bit strange. Its leaves are streaked with yellow, instead of being entirely green. This yellow-streaked corn is a mutant that has trouble taking in iron, making it hard for the plant to create chlorophyll, a green pigment involved in photosynthesis.

Walker, a molecular biologist at the University of Massachusetts Amherst, and her colleagues are studying the yellow-striped corn to learn more about how iron transport works in plants. The information they glean, she says, could help researchers genetically engineer corn and other staple grains to take in more of the mineral, and, ultimately, deliver it to people who lack sufficient iron in their diets.

“The places in the world where iron nutrition is really problematic are places where people are very under-resourced and are practicing subsistence agriculture,” Walker says. “In those areas, people are often eating very, very little meat—if any at all—and they’re also typically relying on rice or corn or another staple for the vast majority of their calories.” Such grain products take up very little iron from the soil, so people who rely on these products for a large part of their diets often do not get enough of the mineral.

We’re struggling against millions of years of evolution to keep iron levels in check.

To combat iron deficiency, plant scientists and bioengineers have been looking for ways to boost iron levels in the foods iron-deficient individuals eat. The strategy is called biofortification, and so far, scientists have had some success selectively breeding plants, especially bean and rice plants, to take in more of the mineral. However, Walker and other molecular biologists and geneticists are looking at how they could tweak plants’ DNA to make the seeds sequester higher levels of essential vitamins and minerals.

Researchers have previously identified genes such as ferritin that, when expressed transgenically in rice, enhance iron uptake (Sci Rep 2:543, 2012). But in many attempts at genetic engineering, the seeds, the part of the plant where the researchers wanted the iron to go, didn’t necessarily accumulate more of the mineral as hoped, Walker says.

“Iron is a tough one because iron is toxic in excess for any organism,” says Michael Grusak, a plant physiologist and director of the Red River Valley Agricultural Research Center in Fargo, North Dakota. He has worked on other biofortification projects and explains that plants and animals have fine-tuned systems that regulate their uptake of vitamins and minerals. By fiddling with iron in plants, “we’re struggling against millions of years of evolution to keep iron levels in check.” Grusak says scientists “can put more iron into the plant, which is absorbed by the roots, but it has to go through all these checks and balances to get into grains, and often the plant says, ‘No, we are not going to do it.’”

A big challenge in overcoming such checks and balances, Walker notes, is that scientists do not yet understand the mechanisms that plants use to signal to their roots that they need to take up more, or less, iron. Several studies, including one recently published by Walker, show that corn and other plants use iron transport proteins, such as YS1 (Yellow Stripe 1) and YSL1 (Yellow Stripe-Like 1), to transport iron from the roots of a plant to its shoots and leaves (Front Plant Sci, 9:157, 2018). But exactly how the plant shoots tell the roots to adjust their rate of iron uptake, and whether the signal is positive or negative, isn’t clear.

Walker and her colleagues were recently awarded a grant from the National Science Foundation to identify this shoot-to-root signal. So far, they have determined that low iron concentrations in the leaf cells leads to the production of some sort of signal in a plant’s vasculature that turns on iron-deficiency–regulated gene expression in the roots. Preliminary, unpublished data suggest that this signal is RNA-based. If confirmed, the result would rule out the idea that iron signaling in plants is exclusively negative—with the shoots telling roots when to turn off iron uptake—as some scientists had previously hypothesized. “We have good evidence now for a positive signal that is being sent out by the shoots and is causing the roots to take up iron,” Walker says. “Our work now is to identify what that signal actually is.”

Grusak commends the work, but notes that if and when the iron-signaling mechanism is figured out, it will take time to move any genetically engineered plants that take advantage of the insights from lab to farm and finally to consumers. Not only does the science have to be solid, but scientists and bioengineers also have to ensure that the new crops have the right amount of the vitamin or mineral to improve human health, explains Howarth Bouis, co-winner of the 2016 World Food Prize and interim chief executive officer of HarvestPlus, a global nonprofit agricultural research program focused on developing and distributing biofortified food crops. For farmers, he says, the crop also has to have yields similar to those of current crops and be resistant to disease, and for consumers, it has to cook and taste just like the rice, corn, and beans they’re used to eating.

Right now, all biofortified crops available to farmers and consumers around the world are grown through cross-breeding plant varieties that have the highest levels of essential nutrients, such as iron, zinc, and vitamin A. There have been several trials of transgenic crops—specifically iron-, zinc-, and vitamin A-fortified rice—and these crops hold a lot of promise for producing plants that have boosted nutrient profiles and are also high-yield and drought resistant. But none have yet become commercially available to farmers and consumers, in part, Bouis notes, because of regulatory restraints on genetically modified foods.

Getting biofortified plants to those who need them most, Grusak says, is “taking longer than we’d like.”